Battlefields in the Mind: Societal Resilience and Cognitive Defence 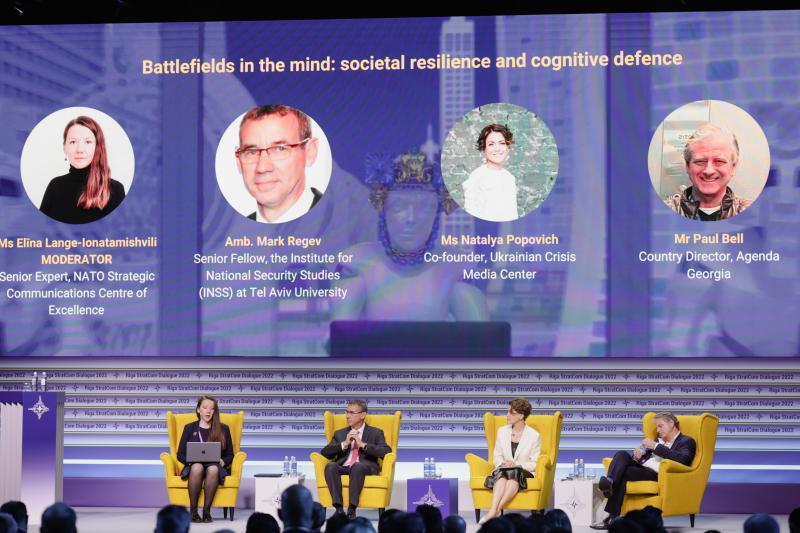 Battlefields in the mind: societal resilience and cognitive defence was the theme of the panel discussion within NATO Riga Strategic Communications Dialogues - an annual event gathering over 1500 participants live and online in which Nataliia Popovych, co-chair of UCSN, shared Ukraine’s experience in building societal resilience.

- Resilience is the ability to counter adversity. Russian imperialism is an adversary far greater than the pandemics. In putting the world on a brink of a nuclear catastrophe and world famine, russia is testing all of our collective stamina and resilience.

- In the Ukrainian language, the word resilience means - fit for life. As Russia is trying exterminate life in Ukraine now, resilience seems to be the only strategic choice for Ukraine - because we choose to live.

1.      Staunch acceptance of reality - no self-pity for our geographical location, no putting your head into the sand - just because you do, the reality won’t become any kinder. Just because we want to imagine Russia willing to live by peace, it won’t become a peaceful neighbour. For this they’d have to start loving Russian children more than than hate Ukrainians.

There has not been a generation of Ukrainians that would not suffer from Russians. In 2022 Ukrainians have accepted the existential challenge russia represents to us having launched the war of extermination of Ukrainians according to their RIA Novosti genocide guidebook. Ukrainians no longer look at russia through any rose-colored lenses. Russia is terrorist fascist state undermining the world security and rules-based order. The sooner everyone else accepts the existential threat Russia represents to all civilised nations, the less Ukrainian soldiers will die in the battle for the values of freedom and democracy.

2.      Knowing who you are and your purpose, what you are ready to live for and die for - in societal terms it means knowing your values, the real (not whitewashed) convenient and inconvenient history of the land and the people, having respect for it and willingness to build the future together.

Ukraine before the Revolution of Dignity, with Yanukovych as president and a Russian national being our minister of defence, with bunch of oligarchs owning the media and regularly broadcasting Russian narratives was very non-resilient, defenceless, vulnerable country. It took numerous efforts to de-occupy our national memory and grow the civic consciousness of Ukrainians.

Countering disinformation is not enough - we worked to build a shared understanding of the lessons of history, a shared memory. Without it, there is no common future. What has helped to grow our resilience in the last 8 years were major reforms of the national calendar of events and formation of the number of state cultural institutions, such as the Ukrainian Institute and the Ukrainian Cultural Foundation. Nurturing of the memory and values of the Revolution of Dignity, including memory of the Heroes of Heavenly Hundred has been extremely important. It is so symbolic that in occupied Kherson Russians are making Ukrainian teenagers to take down the photos of those heroes from the monument. The first thing they do - is try to erase the memory of Ukrainians.

There has been initial opposition to decommunication in some communities, but Ukrainians started for the first time ever discovering their true national and regional history, including the losses of human capital during the 20th century, when our identity, culture have been persecuted. We began appreciating why we need to bring up the Ukrainian language, culture and music from the centuries of their segregation.

So this time we say “enough is enough”. We will not let Russia erase our memories again. “We will lay our body and soul for our freedom and we will show that we are of Cossack kin” we sing in our anthem and these words all of a sudden really bring national values of freedom and dignity to life in the 21st century. They are also manifested by the real life behaviour of the thousands of Ukrainians who are fighting in the Armed Forces of Ukraine.

Trying to exterminate Ukraine, Russia has triggered a new generation of Ukrainians to have a living 21st century memory of Russian brutal attack and making their own - not their grandfathers' - Pledge to fight for life and justice for Ukraine and bring Russia to the responsibility for their behaviour.

This correlates with the recent poll, where 82% of Ukrainians are not ready for any concessions to Russia.

Even in the East of Ukraine that has been heavily bombarded, only 19% of the people would negotiate, in the South of Ukraine only 8% are ready to concede.

It’s not that Ukrainians do not like to negotiate - we unfortunately already know the outcome of any negotiations with Russia: non lasting peace and danger to our lives.

3.      Finding hope/optimism/faith in humanity, in solidarity, in big and small things to carry you through the difficult times.

To be resilient is to raise above the unspeakable atrocities we see today, to have the humanity win against the perpetrators of death.

And this means for justice to prevail and the sacred value of human life to be protected.

We thought we’d have to battle with technology, but technology is only a medium. So first we have to counter ignorance, intolerance, greed, vanity, inequality, superiority, cruelty. If the culture around us is fosters trust (not fear), no tech or social media will disinform or corrupt the people. But if ultimately people anywhere in the world grow up to believe that they are superior to others or entitled to any privileges, TV and tech can easily turn them into monsters. It is enough to hear the conversations of russian soldiers with their wives - it is more informative than any Levada poll.

Also, resilience is not a sport for singles. It’s a team sport. Since the emperors time, Russia’s only allies have been its army and fleet. With time they turned into oil and gas. Deprived of oil and gas dollars, Russian economy will be crippled to continue to wage the war on Ukraine and attack any other free and sovereign state.  As of today, just over a 1033 companies have started exiting Russia but 582 international businesses continue to fully operate there, 430 reduced their presence and only stopped new investments. We need more solidarity - Ukrainian lives should matter more.

Russia has been an empire for at least a century too long and it is simply not resilient to have a nuclear powered state anywhere that wants to be an empire in the 21st century. So, the whole paradigm of the world must change.

Only failure can persuade the Russians themselves to question the sense and purpose of a colonial ideology that has repeatedly ruined their own economy and society, as well as those of their neighbors, for decades. Yet another Yalta, yet another frozen conflict, yet another face-saving compromise will not end the pattern of Russian aggression or bring lasting peace.

Ukraine’s bitter experience shows that societal resilience is more important than all military infrastructure. Staunch acceptance of the reality, knowing who we are, finding solidarity with other like-minded nations, the willpower to defend our land. The love for ourcountry and fellow people combined with respect for others.

For more resilience, we all need to invest more into cultural transformation - ethical and professional formation, rethinking values, security, laws, policies, our attitudes to not only illusionary security but our willingness to bring lasting peace.