To find out more about the PRCA's fight with the NLA, contact Nicholas Dunn-McAfee.

In January 2010, the NLA released an extension to their existing media license scheme, to include a Web End User Licence (WEUL) for companies receiving online content from media monitoring organisations (i.e. PR consultancies and teams).

The PRCA felt the licence was unfair for internet users who will require the authorisation of the copyright holder to view and read their online content. The NLA argued this is necessary because cached copies of web content will be made due to the technological process of reading content online. However, the PRCA argued, that if this were the case, end users such as PR professionals as well as ordinary internet users would be unintentionally infringing the copyright law due to an incidental and technological process.

The scheme also stated media monitoring agencies such as Meltwater Group needed a similar licence, the Web Database Licence (WDL) to supply online media content, which Meltwater wanted to challenge for legality and the associated fees. 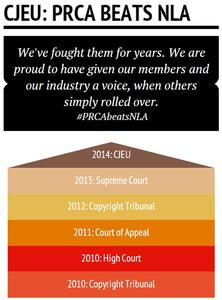 In May 2010, the NLA responded by taking Meltwater and PRCA to the High Court to rule on the legality of its scheme. As a result, the Copyright Tribunal rescheduled their judgement until after the High Court made their decision.

In November 2010, the High Court ruled in favour of the NLA, that both users (WEUL) and suppliers (WDL) require a licence. In addition, anyone who clicks on a link and reads a news article on a public website in a commercial setting will infringe copyright laws unless licensed by the publisher i.e. newspapers. Meltwater and the PRCA were disappointed by the High Court judgment, but successfully had the case referred to the Court of Appeal to try to overturn the judgement made at the High Court for June 2011.

However, the Court of Appeal upheld the High Court decision that the caches made by computer through the technological process are not exempt from copyright laws. PRCA felt that technology was developing faster than the 1988 Copyright Act and that this decision would be costly for many UK businesses and professionals.

The PRCA challenged the specific ruling on the temporary copies exemption made by the Court of Appeal by appealing the ruling to the Supreme Court, which agreed to hear the PRCA’s case.

In May 2012, Copyright Tribunal delivered their final verdict upon the Web Database Licence (WDL) and Web End User Licence WEUL, granting PRCA and Meltwater seven out of nine of their changes proposed. The full licence fee prices were slashed by 90% which saved the PR Industry £100million. Following the ruling, the NLA began to charge fees for the WEUL dated back to 2010.

An entry on the tribunal can be found here.

In April 2013, the PRCA and Meltwater made legal history with a successful appeal to the Supreme Court that could save the UK public relations industry millions in copyright licence fees that may have had to be paid to the NLA, had the decision gone the other way.

The Supreme Court overturned the judgment of the Court of Appeal made in July 2011 and ruled that anyone should be free to visit a newspaper website without fear of infringing copyright law should they view the article on their computer screen. The Court of Appeal had previously ruled that a temporary copy made within and on the screen of a computer when a user clicks on a link to an article shouldn’t be exempt from copyright law protection.

In its 23-page judgment, the Supreme Court unanimously rejected the Court of Appeal ruling and held that prior authorisation was not either required or practical and applied the law as stated in two recent decisions of the Court of Justice of the European Union (CJEU) that established broad principles in the interpretation of European copyright laws.

Temporary copies created as part of the technical processes involved in viewing copyright material on a computer are dealt with by Section 28A of the Copyright, Designs and Patents Act 1988 that itself was added to UK law as a result of EU Directive 2001/29/EC that dealt with the harmonization of certain aspects of copyright and related rights.

According to lawyers for the PRCA, the decision of the Supreme Court is binding on the lower courts.

2014: Court of Justice of the European Union

In his judgment, Lord Jonathan Sumption explained it was desirable that any decision on the point of accessing such content be referred to the Court of Justice for preliminary ruling “so that the critical point may be resolved in a manner which will apply uniformly across the European Union”.

Why not join the PRCA and start enjoying all of its associated benefits.

If you want to keep up to date on news, events and training please register and sign up to the relevant newsletters.