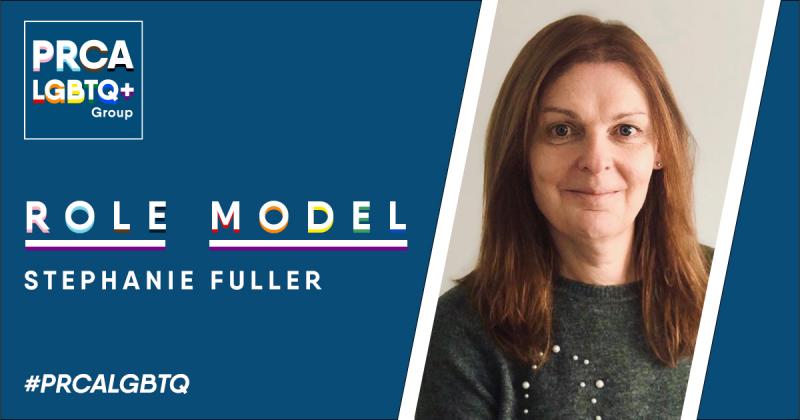 Last week, the PRCA’s LGBTQ+ group kicked off a new series of profiles, looking at role models within the PR and communications industry and associated professions. Our 2021 LGBTQ+ workplace advocacy report—in partnership with YouGov—showed that even though we have come a long way, 29% of survey respondents were not aware of any LGBTQ+ colleagues holding senior leadership positions. So, for those without role models in their own organisations, we wanted to profile some of the amazing individuals that inspire us daily.

“I’ve been lucky enough to call Steph a friend since we became Co-chairs of Proud and Palace, the official LGBT+ fan group of Crystal Palace, together five years ago. Since then, it’s fair to say she has totally changed my outlook, energy and aptitude for activism. The way she leads complex groups—often composed entirely of volunteers—with a sense of purpose and professionalism is truly inspiring. Most importantly, she makes it really fun, which means you admire her even more when you see her switch gears and draw on all her experience in charity communications and fundraising to handle the truly difficult situations we often face. She is also totally unflappable — apart from when Palace lose.”

Stephanie has previously worked for Albert Kennedy Trust, East End Community Foundation, Afrikids and the Sick Children’s Trust, among others, in an incredible career in charity development, fundraising and communications.

1. What is your greatest achievement in life?

Potty training my kids! A task that often felt impossible!

2. What is your greatest professional achievement?

I’d have to say it’s the money I have been able to play a part in raising through leading teams to support a wide range of causes. From accommodation for parents of critically ill children facing long hospital stays often far from home, to social mobility, hospice care and LGBTQ+ homelessness.

3. In what way, if at all, do you believe being a member of the LGBTQ+ community has affected the professional opportunities you’ve had?

I think it’s made me very resilient, being a woman with a trans history means that I’ve experienced a wide range of social and professional situations in both genders and I can see clear differences in terms of how women are treated compared to men in the same situation. I’m very aware of the patriarchy.

I think this has given me a real sense of perspective, of what is, and isn't important, and what hills are worth dying on.

In terms of opportunities, I’m sure, though I’d struggle to prove it, that it has limited my opportunities for me in some circumstances, primarily professionally. But I think this has probably fuelled my sense of injustice which is a positive, but negatively, also my imposter syndrome.

4. What positive change have you seen or personally managed to effect for the LGBTQ+ community over the course of your career?

I’ve recently taken up the post of GM of the national LGBT+ Switchboard helpline, we are a listening service that takes more than 17,000 calls a year and we provide calm words when our callers most need them. Working with brands, we have been able to establish partnerships that extend the reach and awareness of our service and this is reflected in increased number of calls, and in turn this means support.

Personally, in terms of what I have personally managed to effect, I would point to the work I did in starting Proud and Palace, the group for LGBT+ people that are supporters of Crystal Palace Football Club.

This group has achieved a great deal to raise the visibility of LGBT+ people being part of the fabric of football and that it is a game for all.

Then as Chair of Pride In Football, the umbrella group that represents the interests of more than 50 LGBT+ supporter groups aligned to professional football clubs in the UK, as a network we have worked to improve best practice in the UK and also in Europe as part of the EU funded OUT Project.

5. What do you hope the near future holds for progress in inclusivity in the communications industry, and how can individuals make a difference?

I’d really hope for an end to identity politics, whereby it's deemed fair to debate the validity of how someone expresses their gender, as if there is an argument to be won, instead of simply respecting people for who they are.

Honestly, just people being kinder to one another.

, Co-chairs of the PRCA LGBTQ+ Group