How can charities fight misinformation and conspiracy theories? 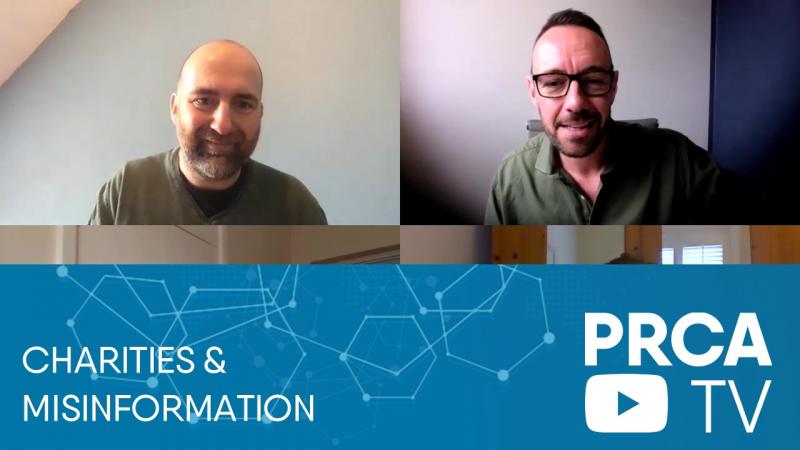 From climate change and vaccine myths to the rising threats of conspiracy theorists, "deep fake" and "astroturfing." It is likely that the struggle against misinformation will define the next ten years for many communicators - those working for charities and not-for-profit organisations in particular.

The PRCA Charity & Not For Profit Group’s latest event, brought together an expert panel to discuss the issue, made up of:

An evolving problem, not a new one

Dawson said that many health charities had previously mostly faced misinformation - incorrect information being shared inadvertently or without specific malice, rather than disinformation. “Increasingly now we’re fighting disinformation, that has been shared on purpose, especially around conspiracy theories,” he said.

Rahman said there had also been an evolution in the channels to which Full Fact was paying attention. Set up in 2009, the fact-checking charity was initially more focused on output from politicians and mainstream media, but is increasingly spending focusing more attention on the social media sphere.

Procter commented with “worryingly low” levels of trust in written press and news websites and increasing fragmentation of the media landscape, “accusations of fake news are increasingly being used as a political weapon… we need to find better ways of protecting truth, no matter how inconvenient those truths may be”.

Harm is the key issue

Rahman said that while Full Fact was always grateful for charities (or others) providing tip-offs or leads around things it ought to look into, it only had limited capacity so would assess the need to pick them up based on asking how important, interesting, widespread and potentially harmful it was. Harm was the most important, she said, but added that there was never a clear-cut answer.

“It is really tricky to measure the kind of harm it can do,” Dawson agreed, saying that for him and his team, that assessment was done through a mix of professional judgment and use of social listening tools.

You can’t win everyone round

Dawson said that there were two broad approaches when addressing concerns or mistruths around vaccines - while his organisation is focused on meningitis, it has long played a role in the broader question of public trust around vaccinations in general - whether for Covid-19 or other conditions.

“It’s important not just to group everyone in the same boat - some people have genuine questions and concerns, but they might get attacked even if they are just genuinely asking a question, and evidence shows that that pushes those people to be more likely to become anti-vaccination,” Dawson said. For the vaccine hesitant, making people feel like they are being listened to - perhaps through a non-public channel, such as the charity’s helpline, could bring them round. “Don't just shout at them and throw facts at them.”

For the die-hard anti-vaxxers, there may be no way of bringing them round, he continued. “Our way of responding is not about trying to convince them, but ensuring people [others seeing or reading their posts] have access to the accurate information,” he said.

Dawson said that working in coalition with NHS and other partners was key to tackling misinformation as a charity, as this approach helps create “a strong stream of verified and accurate information”. He said it was important it wasn’t just one group providing information - Government, or any other single group, could be ignored or seen as part of a conspiracy, but having a broader coalition means that individual members of the intended audience are more likely to find a source that they personally trust.

Don’t be afraid to caveat

A clear theme to emerge from the discussion was ensuring information a charity publishes is well-sourced, checked and appropriately caveated. “We would never ask our readers to just take our word for something,” commented Rahman - Full Fact always works to provide sources and links to show that what they are saying is accurate.

He also pointed to a piece of research that showed that science press releases which contained caveats about the limitations of the research did not obtain worse results or media pick-up than those which failed to acknowledge those issues. He said that including such information was also a good way of saving time for journalists.

Francis said that PR professionals should “apply the standards that you’d expect [journalists to apply] to yourself” in terms of fact-checking and considering alternative viewpoints and evidence. If you’re scared of sharing the full data or having certain questions asked about the accuracy of what you’re putting forward, then there’s a problem, he said.

By extension, charities “need to see themselves as publishers - most charities are digital publishers through having a website”, Procter said. As well as suggesting this might mean they consider signing up to Impress regulation, he said this meant looking at “editorial standards and the governance around those”.

Dawson said that the webinar attendees might “assume that all charities are good at this, but they’re not”. He previously worked for a cancer charity and said there were a “surprising number” of charities sharing potential harmful information about alternative treatments.

Panellists all agreed that having strong processes for checking your output, and potentially getting it peer reviewed in a similar way to academic journals, is a key step if charities are to ensure they can be part of the solution and not - as in those cases mentioned by Dawson - part of the problem.

Thanks to PRCA Charities and NFP Group member Sam Burne James for writing up the event.